What is Maternity Leave

If we talk about Maternity Leave, then we simply concern about the right of female employees. Whenever, any female worker is pregnant then she is medically having permission to take rest during the critical period of pregnancy. Maternity is surely considered as compulsory option of female for 3 months leave with full pay.

All of those female workers, who are near to the confinement of pregnancy then she can apply for maternity leave for 90 days. There is also another option to get this as half before confinement and half leave after confinement. This rule is available is ESTACODE including leave rules of Punjab, Federal, Sindh.

Read More: How To Apply Leave on HRMS Punjab Sedhr 2021

Pregnant Females can apply apply for the leave through the proper procedure of Doctor Certificate through Docket Form.  Maternity leave may be granted on full pay. outside the leave account, to a female civil servant to the extent of ninety days in all from the date of its commencement (as specified in the application for leave) or forty-five days from the date of her confinement, whichever be earlier.

Chances of Maternity Leave During Service

For confinements beyond the third one. the female civil servant (in a non-Vocation Department) would have to take leave from her normal leave account. The spells of maternity leave availed of prior to the corning into force of these rules shall be deemed to have been taken under these rules.

Combination of leave with Maternity Leave 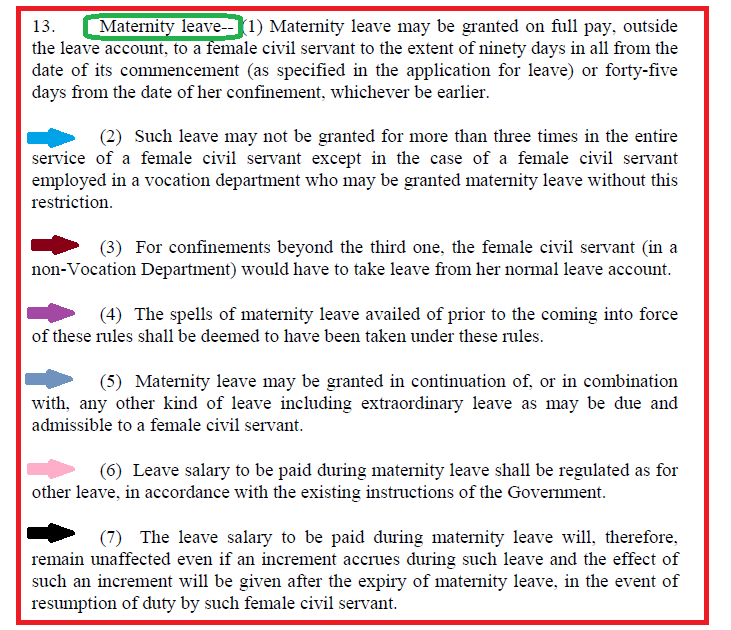